Every application has states. Whether we define them or not, we cannot escape from managing them, even if we are not fully aware of them. But the side effects of having undefined states are bloated databases and overly complicated logic. This complexity becomes increasingly difficult to deal with each time we need to change some logic, and our work becomes more stressful.

The purpose of this post is to present Finite State Machines (FSM) as a design pattern useful in managing the different states of a software application.

Those that have an engineering background, or simply like to create automation for fun, may already understand the FSM concept and its real-world applications. The concept of FSM in software development is analogous to how we describe different states that exist in the real world, although the input-output complexities of the virtual environment require different nomenclature than an analog environment.

Learning state machines is like learning a SUPERPOWER. Why? Because states are everywhere, and learning how to easily manage their complexity is a very powerful tool.

And what are these states that we are talking about?

Let’s consider the example of water. Water can exist in three different states: liquid state, solid state, gaseous state. External events, such as a temperature change, trigger a transition between these states.

Or, we can consider a lamp, with its On and Off states.

In each of these examples, we have mental models that allow us to describe the states of a current entity in an intuitive way. FSM allows us to do this with our applications.

But what are states in the context of software?

If you look at your codebase and see entities associated with columns like approved_at (or approved boolean column), pending_at, refunded_at, reproved_at, paused_at, failed_at, deposited_at , canceled_at, or even boolean-similiar columns, they are columns used to manage possible states that your entity can enter depending on certain conditions. Lets consider the following refund method:

I’m sure that everyone who codes has seen a code like this. Maybe this code above doesn’t seem so bad to you, but think for a few seconds more and imagine having the ‘ifs’ for each of the states described above. Do we know exactly what state came before or after the current state? Or which actions to trigger before each state transition?

We probably would need to read a lot of methods and maybe walk through a few different classes to understand the context of the entity and its possible states. Only then would you be able to abstract what is going on (and even then, maybe not 😅).

Wouldn’t it be great to have a clear way of defining these states and managing them? The good news is that we can do that with Finite State Machines.

What is FSM in the context of software?

A state machine is a mathematical abstraction used to design algorithms that draw the state flow for an entity. The FSM is one of a finite number of states at any given time. A state machine reads an input (event) and switches to a different state based on the input. The FSM describes all the states, the transition between these states, the events that will trigger each transition, when a transition should happen (guard), and the actions to execute (like send and email, or call other method) once a transition is executed.

Why should I use an FSM in my codebase if I can manage states with control flows?

The benefits of using a state machine in our codebase are:

State machines avoid situations where data silently becomes invalid. When used atomically with a database, we have security in state transitions.

Let’s solve a real software modeling problem that most fintechs encounter. We will use a Ruby state machines framework, AASM, although the state machine model can be applied to other languages. The solution will be divided into 3 steps, where each step presents a new scenario that demonstrates the ease and flexibility of state machines. We will focus only on modeling the problem, describing the states, and a few transitions between these states.

Consider a scenario where we have one Application with users’ accounts, and we’re asked to create a feature that invests the user’s local fund (‘App’) into an external investment account (‘Investment Platform’).

To model this problem, one of the solutions is to create a Transaction entity. We will have three states to represent each moment of this transaction.

We would have an state machine similar to this one:

We declare all the possible transitions between states and which events will trigger the state transition:

The update_balances method is an ‘action’ that should be performed after the Transaction state transitions from depositing to deposited.

What would be the change needed to implement this new criteria?

Since we have the Transaction state machine with the states and events in declarative programming, it is very simple to add new states to our entity. The flow from APP -> MIDDLE ACCOUNT is mostly the same as Step 1. The only thing that will change is that we need one more step until the money is available on the destination account inside Investment Platform.

As we can see in the image below, we need to represent the transfer from the MIDDLE ACCOUNT -> DESTINATION ACCOUNT in the Transaction state machine. To represent this in our state machine, we will add two new states:

This is an example of FSM actions mentioned above. Since we have these callback (action) methods associated with the transitions between states, we can easily discover what actions must happen in each state that the application can enter.

In a third scenario, we discover some very important information that obligates us to rethink how to represent the transfer between banks (transaction flow) in our codebase: Each transfer costs $0.20. This new information means that for 1MM transactions = $200,000 (💸💸💸💸).

Let’s consider an example of two transactions, one of $100 and the other of $150 (as shown in the image below). 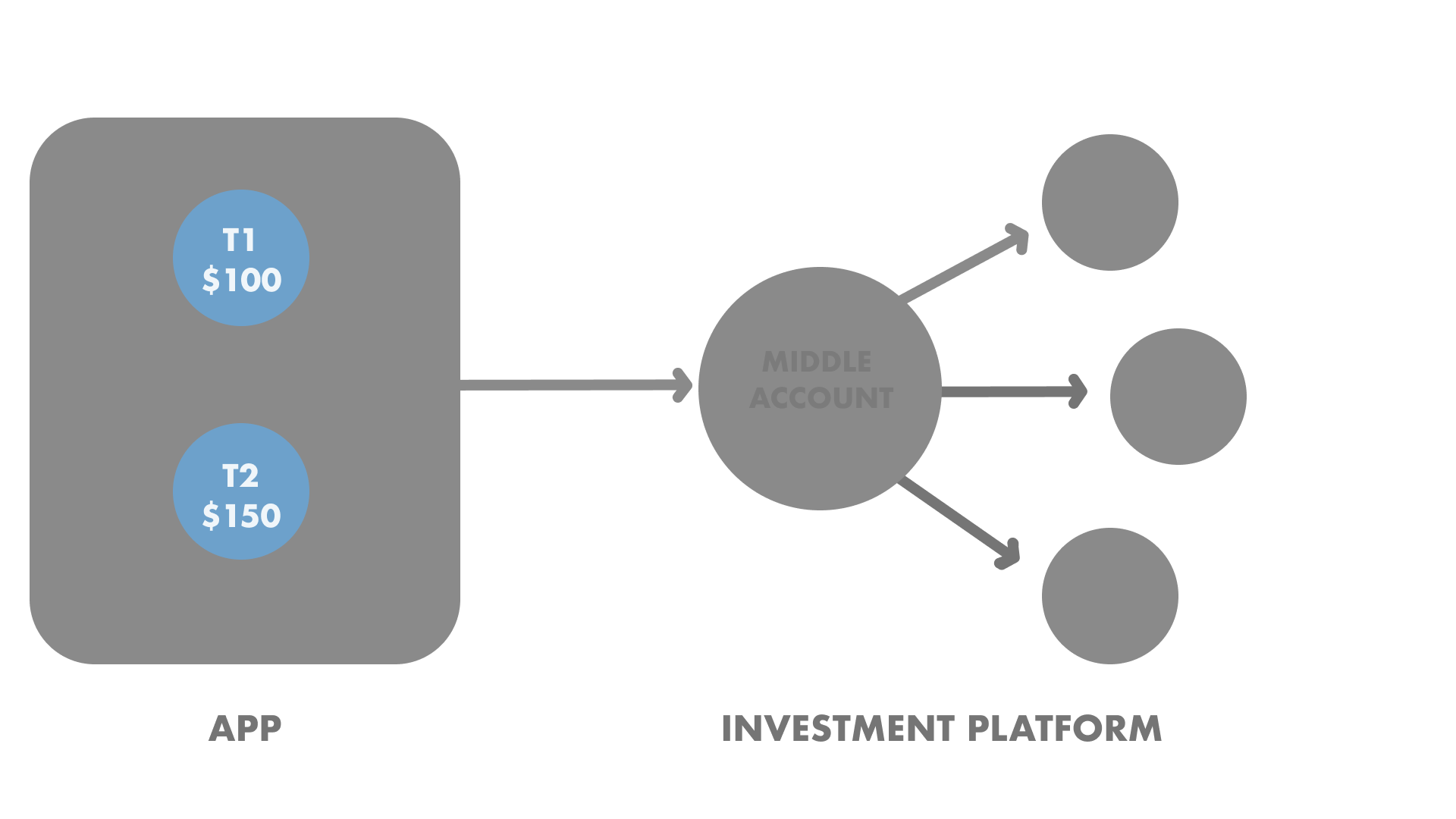 We have two main things that are represented by a transaction record that we show in Step 1 and 2:

With this new entity, we can create a new bank transaction, and this record will have the sum of all associated transaction amounts. Considering the example above, we have two transactions: $100 and $150. Once we request to transfer money from one account to another, we will have a BankTransaction of $250 to represent this transfer between banks. 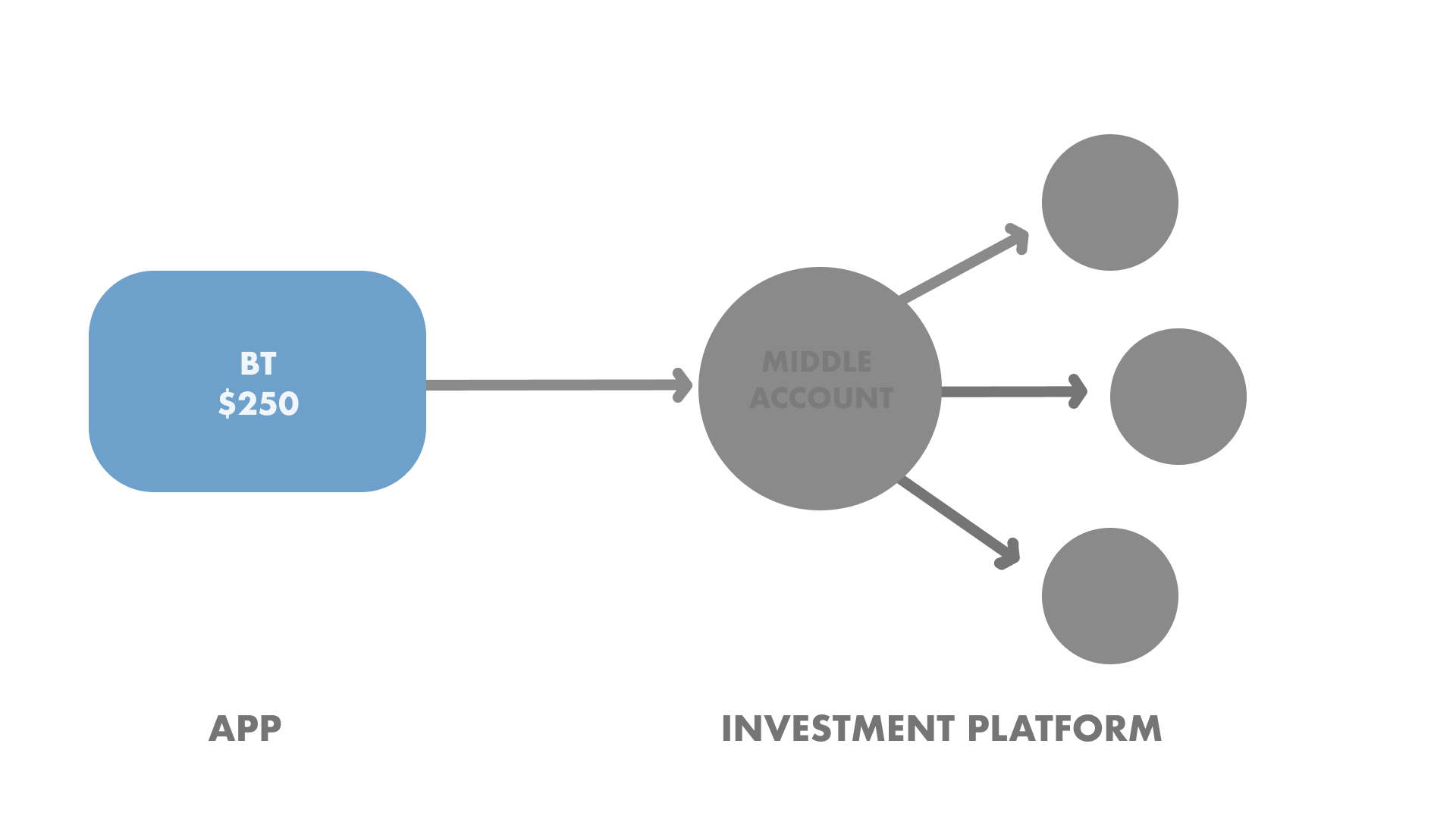 Once the total amount of transactions is available in the Investment Platform, we can request to transfer money to the destination accounts.

We can now split the amount and transfer the expected amounts to the users’ respective accounts. Since we are transferring money inside the Plataform, we do not pay any fee on these transfers. 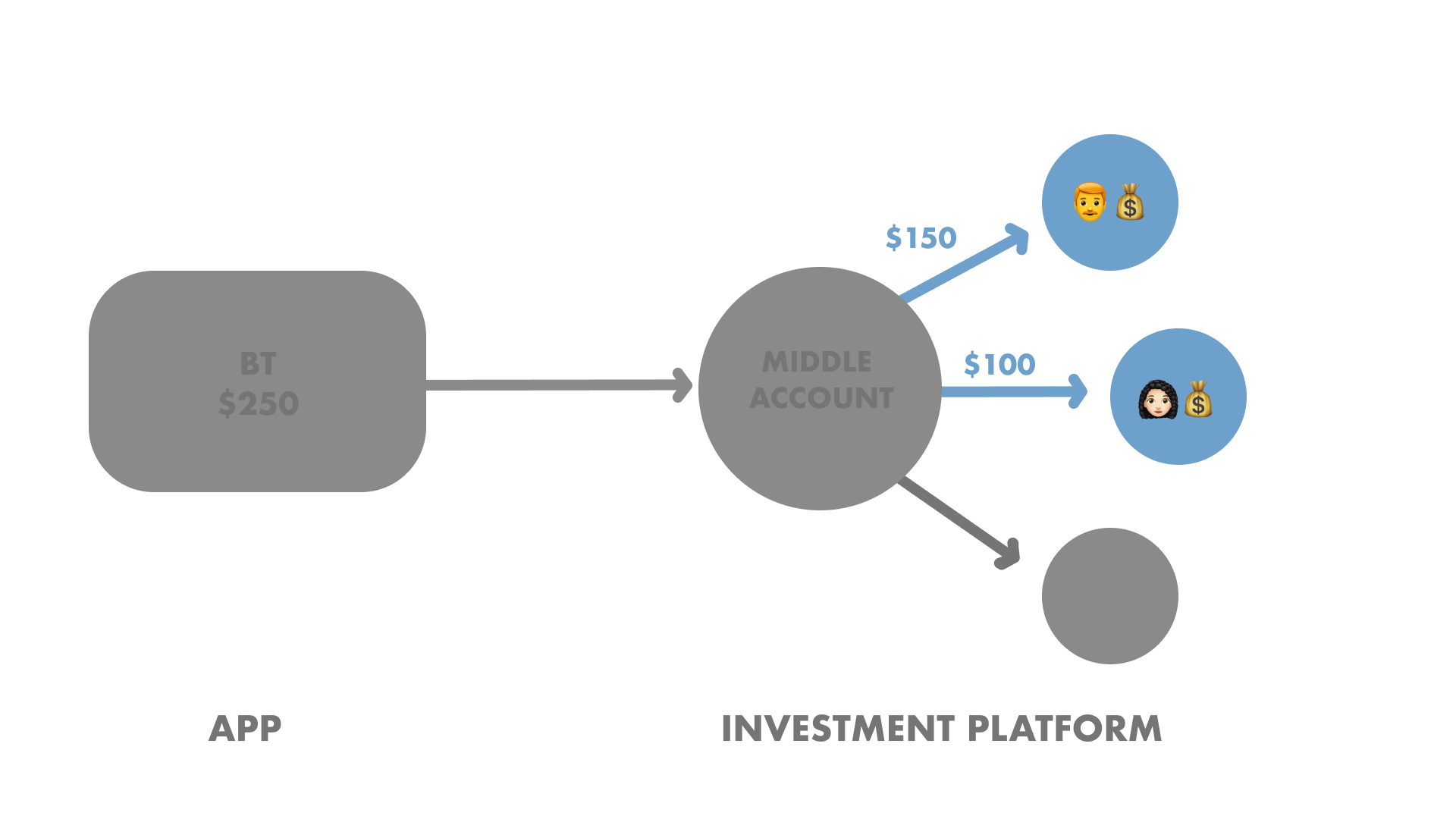 The TransactionStateMachine is the same, we just changed the event names to a better reading.

When should we use FSM in our codebase?

Should you use FSM when you have 1 or 2 or 3 states? Is it the quantity of states that determine when we should use FSM in our codebase? Or is it the complexity of each state?

The short answer, here, is that it’s not written in stone.

I have asked some experienced developers what their rules are for using an FSM approach. The answers are all different. The only thing that all of them agree on is that the more states or complexity between states, the more obvious the benefits of using a state machine becomes.

We are problem solvers and it’s up to us to decide when to use it. Some tips are, if you see the following things throughout the codebase, it would probably be beneficial to use a state machine instead:

My personal suggestion is:

Finite State Machines can be used to model problems in many fields, including mathematics, artificial intelligence, games or automation. Finite State Machines come from a branch of computer science called “automata theory”. Its wide applicability, however, is only beginning to make its way into software applications.

The state machine model can be applied to many programming languages. You can even create your own state machine. FSM is used for modeling frontend and QA tasks too. In each case, there are gains from using FSM modeling. The main idea is to follow the modeling and logic of FSM, where we have all possible states defined, and we follow descriptive programming. These two main rules will give us the benefits of using FSM logic in our codebase.

With this new tool at your disposal, you will bring predictability to your codebase and regain some peace of mind when managing your application’s states.